Fountain of the God of Mela

Meeting point in Milazzo, where we say, joking, let's meet the "cavaddi", to indicate that we must meet at the Fontana del Mela, that, precisely, with horses, the work of the great artist Resta, who realized it in 1990, in front of the Church of Carmine. In previous years, however, there was a kind of round tank, with some gush of water, when it was cleaned and arranged. 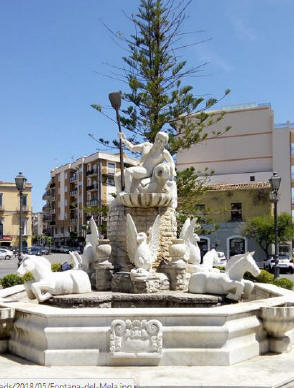 The first fountain of the "Mela" dates back to 1643. the year in which under Philip IV the senators erected the first "Fonte del Carmine". transferring to the square the statue of Mercury, which was placed at the entrance of Porta Messina (an open space that was the site and market exercise) to put it on top of a decorated marble carved fountain with four lions. It had been destroyed during the Spanish siege of 1718-19 and rebuilt between 1762-63 replacing Mercury with the human representation, in fact, of the god of Mela, the river of Milazzo that scenes from the mountain of St. Lucia, fountain with seahorses marine and eagles, not gallinaceous, as the milazzesi think, but eagles, symbol of Milazzo, where in fact the coat of arms is the Aquila "to impose seas, Sexto Pompeo Superato", to indicate the victory of Rome on the pirate Sesto Pompeo, that infested the seas in front of Milazzo, a point of passage also for the Romans who descended along the boot to arrive at the Strait of Messina and reach Africa.
In the following years, the administrators took measures aimed at the water supply of the fountain and the protection, so that they could not water any kind of animals, since those would have destroyed it!

In place of Mercury, we said, a marble statue was placed representing the mythical Mela, the river of Milazzo, in the shape of an old hoary surrounded by seahorses, holding a river oar in one hand and in the other a jug from which poured the water.


In 700 the waters were supplied, through a long aqueduct, from the source of Contrada Mangiavacca called "Cuba". Having been removed, as mentioned before, in 1938 by the mayor of that time, in 1990 the Municipal Administration had a marble group made by Lucchese sculptors, similar to the old fountain, and had it placed in the middle of a flowerbed, which currently operates as a traffic island.

At the time of the garibaldini, finally, remember that ... "Entering Milazzo you come to a square where there is my fountain with marble statues, closed around by a railing practicable for some pure iron doors. palace from which the Italian flag is waving ...
This is the story of the Fontana del Mela, which the milazzesi thought, in the past, it was a God baker, practically a picciotto of the famous "Donna Gasparina" bakery, believing that the wooden paddle was actually a baking shovel, to remove the hot bread. But the Milazzesi, yes, they are jokers and talkers. Finally, after the fall of the administration of Lorenzo Italiano, the fountain is served for betting and so on: for example after the fall of Lorenzo, they took a bath in the mayor's opponents, given the summer heat, to mimic the Ekberg and the Trevi Fountain, in Rome, in Fellini's fil, but that woman was another thing.