FEAST OF ST. JOHN THE BAPTIST

The processions in Milazzo

Thanking the friends of S. Giovanni di Milazzo for the kind concession of the photos and, apologizing for the inconvenience in viewing the page, I report the historical information received. 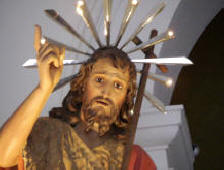 I state that the procession of the Saint is a moment of important chorality for the "Sangiuvannoti", a very high expression of aggregation, power and opulence of a fraction, which should not be disfigured compared to other parties, as if we were in Siena, the Palio ! The Feast, we said, must be sumptuous and stand out among all the other Milanese processions, trying not to appear at all inferior to the one par excellence of the Holy Father St. Francis of Paola or St. Stephen, which for the time being is more muted . If you do not enter this order of ideas, you can not understand why the statue of St. John must be well embellished, the band paid to play for a long time, the fireworks shoot long and with special effects and the orchestras that they perform at the forefront and have to please everyone, both old and young! Indeed, since I am also sangiuvannoto, because as a child I jumped these places, having lived among those of St. John, I remember that there was a famous barber, the goodbye of Nello Russo, in the barbery of which they treated with extreme seriousness these themes: the good Nello wanted to bring for the Feast of St. John, the actor Mario Merola and the Sceneggiata Napulitana, a great work of art expression of powerful messages for how he explained the good soul. In this he clashed with the youth of St. John who reproached him for not understanding anything, that it was better to invite the Dik Dik or the Team 84. And down hours and hours of disquisitions, while everyone smoked nervously and Nello scolded these young idlers accusing them of not being able to appreciate this artistic expression of the Neapolitan people, because they were ignorant: for ex. they did not know "A report card", "'O zapatore" that mom never forgets, emphasizing the richness of contents and so on! Followed by a video clip, an example of the chorality of the Feast of St. John, this year, 2018, a little more muted, but always well taken care of, including the fires ...

Now you can read ....
The church of S. Giovanni was founded in 1678 by the priest Placido Amodeo, next to an inn that housed the travelers forced to wait for the morning opening of the city gates. The church later passed to the D'amico family, owner of extensive gardens in the area. The current building is a single nave and a gabled prospect: it preserves in the niche the polychrome eighteenth-century statue of S. Giovanni and also a contemporary painting depicting St. John at the foot of the Madonna. The stuccos of the triumphal arch are adorned with a folder dated 1895, referring to a first restoration. Today the Church is part of the Parish of the Sacred Heart of Jesus, directed by the parish priest Don Marco D'arrigo. 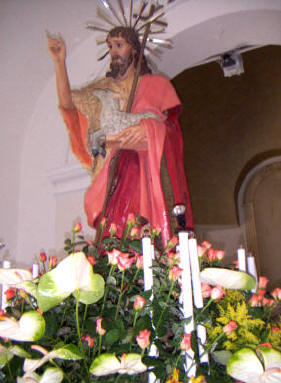 The committee of St. John 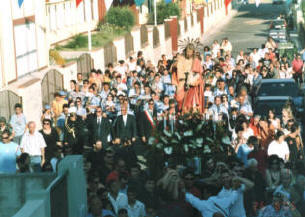 Since March 2000, by the will of Don Peppino Cutropia, and thanks above all to the generosity of the inhabitants of the neighborhood, and in particular of some of them more 'enterprising, was established the Committee St. John the Baptist. Before March 2000, the church was not accessible as it required various interventions, so the constitution of the committee began various works, including the rebuilding of the roof, the installation of a new entrance portal, the lighting system , the restoration of the statue of San Giovanni up to the complete reconstruction of the recently altered altar. Being that the committee counts among its ranks: carpenters, electricians, ferrets, masons, etc. , the works are performed free of charge. Free courses of singing and guitar, for children, organized in church and followed by professionals. To date, the synergy and collaboration that existed with Don Giuseppe Cutropia continues with the new parish priest Don Marco D'arrigo who follows the various pastoral activities.

Every year in June, the committee is engaged in the realization of the celebrations that in addition to a long and participated procession sees organized evenings of entertainment in the square, which have seen groups like: I Camaleonti, Equipe 84, Collage, New Trolls. INDEX  MILAZZO