Villa Vaccarino, the liberty style and the ghosts

The ghosts of Villa Vaccarino 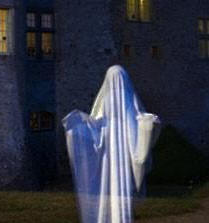 The historian Antonino Micale, in the "Stradario storico della città di Milazzo", talking about Via Cristoforo Colombo, stops to describe Villa Vaccarino. It speaks of a "large garden, below the historic district of the Spaniards, ... used as a 'place of torture' for common and military criminals. Here he was hanged and beheaded in 1817, a Neapolitan pirate, certainly Aniello Cuomo ... The 'garden' passed, then, owned by the Zirillli family and on part of it rises the beautiful liberty building of the villa Vaccarino (recent ownership municipal) in whose park an ancient popular belief wants to err 'shadows' and 'voices' of the executed, and where until the beginning of the century it was customary for the commoners to make the night 'scute'; a 'listening' of an almost pagan rite referring to the future of events and people ". In practice, someone saw the shadow of Cuomo wandering the avenues of the Villa with his head in his hand. Whether it's a place, torture is truth. For example, the Holy Father St. Francis, when he arrives in Milazzo, sees in this area, called the hill of S. Basilio, a condemned man who had been hanging for three days, now swollen and stinking, hanging from the noose. It is moved to pity and orders the poor monachello who was with him, such Majorana, to cut the rope. The monk refuses for fear of being tortured too, but the other Calabrian friar climbs onto the scaffold and cuts the rope: the dead man falls into the arms of St. Francis and resumes his life.

But let's go back to the liberty style of Milazzo. 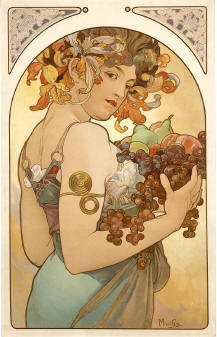 Alfons Mucha, Frutta, 1897. Art Nouveau, also known in Italy as a floral style, Art Nouveau style or new art, was an artistic and philosophical movement that developed between the end of the 19th century and the first decade of the 20th century. the figurative arts, architecture and applied arts. The name Art Nouveau ("new art") was coined in Belgium, in France the movement was also known as Style Guimard, Style 1900 or École de Nancy (for art objects); also in Great Britain it was known as Art Nouveau together with the definitions in the language of Modern Style or Studio Style, while in Germany it took the name of Jugendstil, in Austria Sezessionstil, in the Netherlands Nieuwe Kunst (translation of Art Nouveau in Dutch), in Poland Secesja, in Switzerland Style sapin or Jugendstil, in Serbia and Croatia Secesija, in Russia Modern and, in Spain, Modernism.

The Liberty style name that spread in Italy derives from the Arthur Liberty warehouses in London, which regularly exhibited art objects and fabrics designed in the Art Nouveau style at the end of the 19th century. The Art Nouveau in architecture and interior design overcame the eclectic historicism that permeated the Victorian age. The artists of Art Nouveau selected and modernized some of the Rococo elements, such as flame and shell decorations, instead of the classic Victorian natural ornaments. Instead they favored nature for their source of inspiration, but they evidently stylized the elements and expanded this repertoire with the addition of algae, blades of grass, insects. Ultimately, the most revolutionary character of architectural research was the complete renunciation of the architectural order which, despite some experimentalisms, had retained throughout the nineteenth century its own role throughout the architectural landscape, not only academic.

Milazzo and the Liberty style. 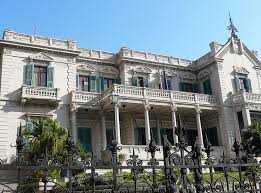 Milazzo as a seaport, land of the English who lived in 800, could not remain insensitive to new fashions. The Art Nouveau villa, built in 1929, has for decades hosted the branch office of the Barcelona court. Vivida Art Nouveau expression, Villa Vaccarino in Milazzo was built in 1929 by the engineer Gaetano Bonanno with the collaboration of the painter Michele Amoroso, who took care of the decorative part. The construction in 1982 has been recognized of considerable historical interest, its undisputed charm lies in the balance between architectural elements and decorative elements. Worthy of special mention, among the prominent elements of Villa Vaccarino, is the spring with a tank equipped with an artificial islet with a replica of the features of Sicily. The villa testifies an elegant balance between architecture, spaces and decorations. Inside, valuable decorations in wood, iron and stucco, and worthy of interest is the fence made of wrought iron, with elegant floral friezes that are found in the windows. In front of it, the other villa that is a wedding favor, which belongs to the Greek family, a noble family of ship owners, owner of vapors, today inhabited by Franzino Greco. Il Villino Greco of Milazzo (province of Messina), admirable Art Nouveau art designed by the engineer Letterio D'Andrea dates back to 1907. The significant features of the construction are to be found in the colors used for floral decoration and for the elegant zoomorphic motifs in the ornament of the facade. Remarkable is also the wrought iron gate, with a large-leaf design on geometric themes, rebuilt in 1986.
Finally on July 15, 2018, after a period of decline, the garden was cleaned up and it was possible to enjoy and enjoy these places of our history, as you can see in the video below, shot by TVN Milazzo, on the occasion of the reopening of the Villa Vaccarino to the public.