In Greek mythology Hera, patron of marriage and childbirth, was considered the sovereign of Olympus. What better blessing, then, for a room specializing in weddings and ceremonies than that of Zeus's wife? But here it seems to be not on the Olympus but inside a flying saucer, with the show of the Castle of Milazzo and the Saracen Tower of sighting, while we are leavening on the promontory of Capo Milazzo. In Greek mythology Hera, one of the most important deities, patron of marriage and childbirth of Kronos and Rhea and wife of Zeus, was considered the sovereign of Olympus, very jealous of her husband's betrayals, especially hated Heracles, her stepson as it was Zeus's favorite. Hera, also known as the most vindictive of the gods, often used men as the authors of her destructive will and chose them by sending them peacock feathers. The corresponding figure in Roman mythology was Juno and was portrayed as a majestic and solemn figure, often seated on the throne wearing the crown. From this name is inspired by our project that is inspired to become a point of reference for events in Eastern Sicily. 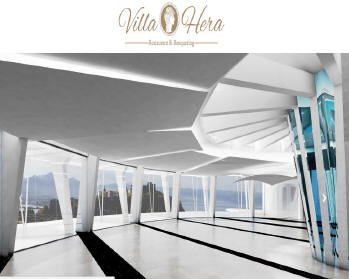 Villa Hera, located on the road leading to Capo Milazzo, is considered one of the most elegant banqueting rooms in Eastern Sicily. It consists of two completely renovated structures designed by the architects Giovanni Fiamingo and Giovanna Russo of the NextBuild studio. The restaurant, about 80 seats, has a terrace under the Saracen tower and a winter garden where you can enjoy aperitifs. It offers a gourmet cuisine directed by Franco Marzini with the chef Virgilio Valenti. It is open every day for dinner (except Monday).The opening of the banqueting hall, directed by Alessandro Busacca with chef Nunzio Formica, is scheduled for June. The room has about 350 seats, pool verandas and gardens. The estate, which revolves around a panoramic room overlooking the two seas, rising with the Gulf of Milazzo and the west with the Aeolian Islands, enjoys the striking central view of the fortified citadel.

From the hall you can access the veranda, characterized by a bioclimatic curtain that will give the possibility to taste the aperitif, the dinner or the dessert buffet in case the weather is not "lenient" and thus guarantee the possibility to your guests to constantly enjoy the outdoors without worrying about the weather. In the pool area, adjacent to the room, aperitifs will be proposed that can be consumed in the panoramic garden in which it is immersed. In the summer, however, the restaurant will offer the opportunity to savor the delicate cuisine in two different areas, on the terrace at the foot of the Saracen tower, with the scenery of the Aeolian Islands front and the Gulf of Milazzo behind or descending from the staircase immersed in the fountain , in the garden below the tower if you want to savor the "thrill" of the overhang that identifies the entire estate.
What about typical dishes? From the wine list? Of the fish and lard combination of nebrodi, Arabian, Sicilian and Norman sweets. Watch the video and you will understand everything.