To my father, Antonino Italiano, who took his first steps as a laborer, in the hard world of the tonnaroti, when the "brawny men" still existed in Milazzo and the bread was salty like our sea ...

The history of the tuna fishery in Milazzo

The history of the tuna in Milazzo is lost in the mists of time, when the Arabs taught the milazzesi how to fish the tuna, building a system of networks that lined up the swarm of tuna towards an increasingly restricted environment up to the so-called "death chamber", where the tuna emerged to be filled with maritime mighty bygone days.
Al Idrisi, an Arab cartographer, at the beginning of the year one thousand, talks about Milazzo and its tuna, which slowly become five. Federico Giordano in 1300 has one in Milazzo; in 1700 the noble family of Cumbo-Borgia continues the work of tuna fishing and owns an industrial tonnara providing for the conservation of tuna in oil. Finally we arrive at the noble lords D'Amico and Calapaj who are the last to work the tuna in Milazzo. Also the marquis D'Amico is known to have a lookout point, the so-called "Palombaro", whose remains can be seen at the extreme point of the promontory, towards the S. Antonino Bay, point of observation from which the gentleman observed the approach the tuna. 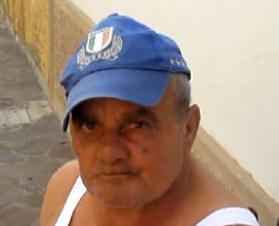 One of the last tunnaroti, Mr. Nino Maisano, called U 'Negus, interviewed, reports that in Milazzo there were ten tons:
- of S. Lucia, pa 'Luci
- Cala a Pila
- In Tunnara u 'Chiovu
- A 'Scinduta da Tunnara i Milazzu
- Vaccaredda
- A Cruci di Mari
- A Cala u 'Pipi
- In Cala Fossa
- In Tunnaredda i 'S. Antoniu
-A Tunnara u 'Tonu

The true story of the palischermo 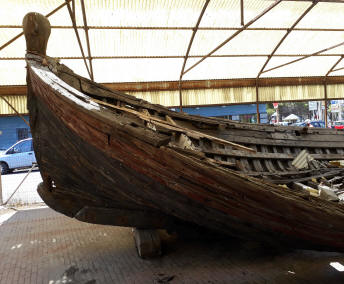 On the occasion of the descent into the sea of Tonnara del Tono, that is when it was preparing to plunge into the sea, into the West sea of Milazzo, the complex system of web that should have captured the tuna fishes, on the boat of S. Tommaso, the sailors of the tonnara, or tonnaroti, performed the wild and ancient ritual of the mattanza, the characteristic catch of the tuna by large harpoons, (crocchi e 'mpinnajaddini).

Over 17 meters long and 4 meters wide, the Palischermo S. Tommaso was built at the turn of the twentieth century by the master of Milazzo Giovanni Vitale (1852-1939), then restored or restored in 1937 in the shipyard of Francesco Salmeri (1894- 1976). 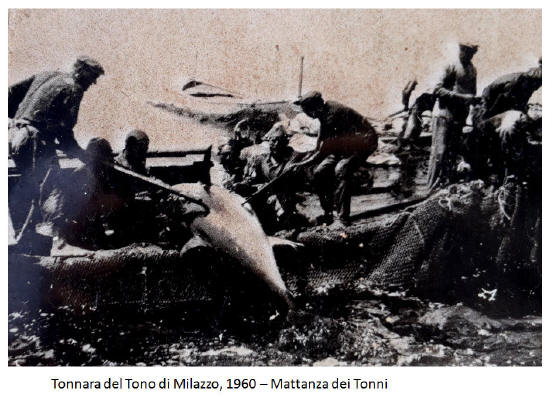 The slaughter of tuna

The wiry arms of the tonnaroti hoisted the tuna in the last chamber of the tonnara, called cùlica, that is the death chamber. The tonnara was an immense network, a large trap, dropped into the sea, with different environments or disappeared, called rooms, which received the unfortunate tuna that were directed there, through an ingenious system set by the tonnaroti who designed it. They trapped the tuna in the last chamber, temporarily hoisting the doors of the chambers, that is, the nets that divided the chambers, so that the tunas remained confined to the last chambers, that of death, the culica. Here the tuna fishermen lined up with the boats, including the famous palischermo S. Tommaso.

The construction of St. Thomas 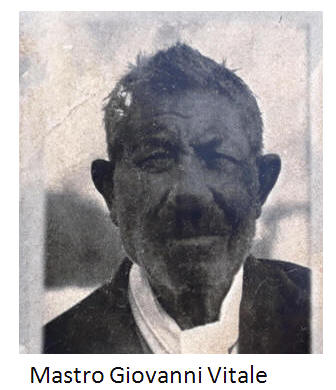 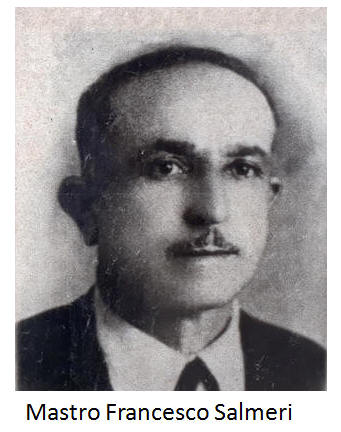 The master carpenters having to build strong boats that had to last over time, chose the best wood, or essences, that came from the best trees; they used the oaks of the woods of Messina to build the ordinates (floors and stems), timber probably taken from Novara di Sicilia, the Calabrian pine for the planks and courses of the planking. For the mighty paramezzale exploited the picth pine, while for the 2 rooms placed side by side with the keel, we used whole logs 10 meters long each, of elce, coming from the woods of Calabria.
The palischermo was built with the help of the old carpenter tools still employed at the turn of the twentieth century, in particular hand drills, large hand saws, in jargon called catìpuli and above all the ax with 2 hands, used to rough the ordinates, to they are designed with the half-wreath technique. The individual wooden portions of the hull were fixed with nails of wrought iron made by milanese smiths and strengthened with the application of riveted pins, which were nothing more than metal bars of 20-30 cm in length and 3 in diameter. The entire hull was then subjected to caulking, which provided the use of tar tow, the latter inserted into the comings (cracks) of the plating through sculls, metal tools beaten by the mallet of the caulker, worker this last employed by mastro Giovanni Vitale. Even today, in the cracks in the planking, it is possible to observe several remains of tar tow, the one applied during the last maintenance work dating back to 1960, by Stefano and Giovanni Provvidenti brothers, expert carpenter of milking and calafati milazzesi, also known to be the grandchildren of mastro Giovanni Vitale. The construction of the palischermo was completed with the application of hot-brushed pitch with lanate, strips of sheepskin and / or rabbits and with the typical reddish painting of the 3 rows of belts for purely aesthetic purposes.La lenta agonia del palischermo S. Tommaso

After 1937, the year of the restructuring by the Salmeri shipyard, the St. Thomas underwent several ordinary maintenance interventions, attested by the considerable number of wooden elements added subsequently, the so-called calature, ie the curved reinforcements flanked to most of the stem cells . Abandoned since the late sixties, following the end of the activity of the Tonnara del Tono, the palischermo has undergone a progressive deterioration, which has caused among other things the loss of stalls or chains of the stiratu, the lateral corrode within which the tonnaroti were available side by side, during the massacre. Despite having been subject to a constraint by the Superintendency of BB.CC. and AA. of Messina, has not yet been subjected to any restoration work. Similar fate has touched all the other boats (4 palischermi) saved in the other 2 tonnare of Messina, the tonnara of Oliveri and that of S.Giorgio di Gioiosa Marea, all built in the Milazzo shipyard by Giovanni Vitale and the brothers Stefano and Giovanni Providents who in 1933 launched the palischermo caporais S. Rita and S.Giorgio.

Historical sources.
This passage is taken from sources of the brothers Stefano and Giovanni Provvidenti and from the story of Don Fano Salmeri (1930-2011), son of mastro Francesco and old mastro Gianni Chillemi, trained in the yard of Provvidenti. We at Sito Milazziano collect the precious memory and pass it on to the web and to the whole world so that we do not lose the memory of it.VIDEO