The cave of Polyphemus, in Milazzo

The Grotta di Polifemo, a meeting point in Milazzo, great Night, very suggestive, in the crevice where the giant Polyphemus lived, in the sixties and seventies was a famous venue for the milazzesi who organized parties and weddings. Before that, in the years of the Great War, it was enlarged by the Military Engineers in 1943 to install artillery, and was also used as a defense with a cannon aimed at the sea, given its strategic point, under the Castle of Milazzo. 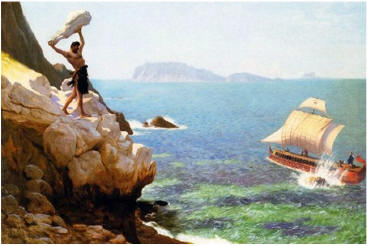 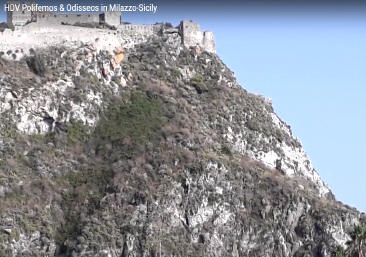 Returning to the night and the dance hall, the urban legend of a married couple (the great friend Gino Celebre talks about it) is told that during the wedding ceremony, at the banquet, while there was the entrance of the couple, the music teacher who directed the orchestra, thought to do something pleasing, intoning the song "Female, you yes' na mala female etc.", arousing the anger and the tears of the bride who was offended. So the groom had taken a trombone and stuffed it like a coppola on top of the poor musician! But they are urban legends! The fact is certainly that the cave, really, was home to cattle shelter and this for many years, so that the undersigned, as a child, remembered that mandre grazing in the barren lands of the Tono, climbing the slopes of the Promontory, the where it rises towards the heights of the Channel and Montetrino. Unfortunately, at the end of the '70s the Grotto was closed and since then it has not reopened its doors ...

But let's get back to the legends.
A large entrance and a corridor led into a large circular room, in one wall a beautiful painting depicting Polyphemus stood out with his eye observing from a distance the boat of Ulysses. In fact, popular beliefs want to see it as the ancient home in which Polyphemus imprisoned the astute Ulysses with his men.

The legend tells that Polyphemus ruled the herds of the Sun God, in this land (called Chersonesus of gold) sung by the Greeks for beauty, climate and fertility, when Ulysses, a man of multifaceted ingenuity, landed there after a shipwreck. Homer tells us that Ulysses, during his long journey back from the Trojan war, landed in the Land of the Cyclops. 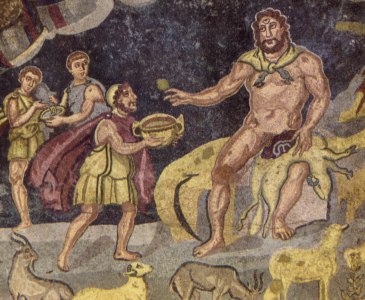 Driven by curiosity, Odysseus reached the cave of the most terrible of all, where he lived precisely Polyphemus, who probably had to be a very large man. After all, in Milazzo, in the Tre Monti area, skeletons of huge men were found, others even 2.7 meters, perhaps suffering from gigantism, a condition very frequent in our area, probably due to genetic selection; for example. even at Capo Milazzo, men and women, they were very tall.Returning to Ulysses, these were captured by the giant. Since the men of Odysseus, though Circe had warned them, had fed on the flesh of the herds of the Sun God and Zeus had punished them: none of his companions, in fact, could return home, except the pious man, Odisseos. Trapped in the cave of the Cyclops, whose entrance was blocked by a huge boulder, Ulysses devised a plan to escape Polifemo's captivity. As a first move, he offered some very sweet and very strong wine to the Cyclops, to make him fall into a deep sleep. Polyphemus liked the wine so much that he promised Ulysses a gift, but asked for his name.

Odysseus, astutely, answered him then to call himself "Nobody"; "And I will eat last Nobody", was the gift of the Cyclops. After that Polyphemus fell asleep deeply, dazed by the wine. Here is that Ulysses put into practice the second part of his plan. In fact, together with his companions, he had prepared a large stick made out of an olive tree which, once red-hot, was planted in the eye of the sleeping Cyclops by the Greeks. Polyphemus screamed so loudly that he awakened his cyclops from his sleep. They then ran to the door of his cave while Ulysses and his companions were hiding near the flock of Cyclops Polyphemus. The Cyclops asked Polyphemus why he had screamed so loud and why he was invoking help, and he told them that "Nobody" was trying to kill him. The Cyclops thought it drunk then left him in his pain. 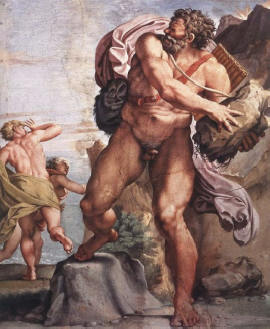 The next morning, while Polyphemus let out his flock to free him, since he would no longer be able to guide him, Ulysses and his soldiers escaped thanks to another clever stratagem, which was part of the third part of his plan. Each of them clung to the fleece of a sheep's abdomen to escape the touch of Polyphemus, as the Cyclops stood before the door of the cave, feeling each sheep out to prevent the Greeks from escaping. Ulysses, the last to leave the cave, clung to the larger Aries, the favorite of the Cyclops. Realizing the Greeks' escape, Polyphemus pushed himself onto a promontory, where, blindly, he began throwing rocks against the sea, trying to sink the ship. Here Ulysses made a mistake. At the umpteenth blank shot of the Giant, Ulysses laughed and shouted: "If someone asks you who has blinded you, answer that it was not Oudeis (" Nobody "), but Ulysses of Ithaca!", Thus revealing his true name. Polyphemus, having come to know the identity of the Greek, had to curse him, invoking his father Poseidon and begging him not to return him to his homeland. Many tourists visit Milazzo attracted by this cave but unfortunately the Polyphemus Cave can not be visited.
INDEX MILAZZO