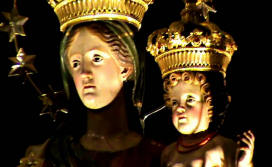 The Carmine Church and the structures of the Carmelite Order Convent constitute a monumental aggregate located in Piazza Caio Duilio in the historical center of the city of Milazzo. Belonging to the archdiocese of Messina-Lipari-Santa Lucia del Mela, vicariate of Milazzo under the patronage of San Francesco di Paola, archpriest of Milazzo, parish of Santo Stefano Protomartire. The Church of the Carmine is a point of worship and reference for the community of the Milazzesi, who are particularly devoted to the Madonna. The power of the S.S. Virgin of Carmel is lost in the mists of time, since the Crusaders found the first groups of Carmelite monks, who lived in Monte del Carmelo, where tradition has it that the house of S.S. Virgin. They themselves, living in small cells, dug into the rock, compared themselves to bees that spread the sweetness of the Christian word. The cult, however, was hampered over time by the Saracens, and the monks had to take refuge in Europe, and exactly a first convent arises in Ritiro, Messina and from there also in Milazzo was soon founded our Church. They said of the power of the Virgin: the Church of Milazzo was destroyed by devil and built by the cult and with the help of the Virgin up to the present day. In fact, the last restoration dates back to 2013. Today, July 16, 2018, you can enjoy the procession and devotion of worship to the Virgin of Carmel, a very high expression of faith and Sicilian culture. Follow the news on this beautiful church of Carmine, the Spanish, which was confiscated after the arrival of Garibaldi, whose convent was given to the City of Milazzo for the town to arise. The height is that the Town Hall was restored but not the Church!

Finally, let us remember that the Madonna del Carmelo appears to the shepherds of Fatima, to whom she gives the scapular and likewise the miraculous wooden simulacrum of the Madonna del Carmine (18th century) of the homonymous Milanese church, appeared to the captain Peppino D'Amico in the battle of Tobruk (1941), saving him, when everything seemed lost. 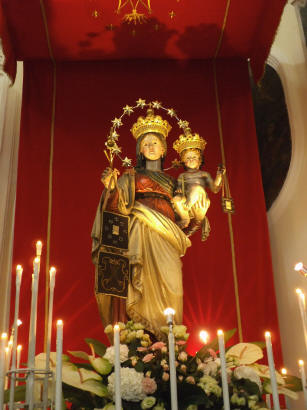 Ithe Carmelite father Andrea Cordaro from Tripi, commissioned by his superiors and at the request of the city went to Milazzo where he founded a convent of the Carmelite Order. The chosen area is the site of the ancient church of San Filippo d'Agira, belonging to a local fraternity and the church of the Madonna della Consolazione, a place of worship sponsored by the Rigales family. In 1570 the demolition of pre-existing buildings is documented and the construction of the new temple is started. In 1625 - 1626 taxes were set up to finance the maintenance of the main places of worship. Established funds for compensation and restorations and prepared actions to bring water to the source of the Carmine.

Between 1643 and 1648 the Porta Alemanna and the Fontana are documented in the immediate vicinity of the Piano del Carmine.
In 1659 Porta Nuova was closed on the Largo del Carmine. Porta Reale or Porta dei Santissimi Martiri was opened at its side. The gates constituted access gates through the Spanish curtains to the residential nucleus built in the lower part of the city.

In 1718 in the context of the war of the Quadruplex Alliance a fort was built behind the Carmine on the part of the eastern coast called Spiaggia del Carmine.


Austrian period
The church was almost entirely destroyed - with the exception of the apse - during the Spanish siege of 1717 - 1719 commissioned by Philip V of Spain, it underwent reconstruction and improvement in its present form between 1726 and 1752.

Bourbon era
In the lent of 1806 King Ferdinand of Bourbon witnessed the processional rites of Good Friday that move from the Cathedral to the Largo del Carmine, from Palazzo Proto where he was a guest. The sovereign is often in the province to ingratiate himself with the benevolence of the populations during his second reparatory escape near the royal palace of Palermo.
During the insurrectional revolts of 1820 - 1821 the convent was occupied by military artillery garrisons.

Unitary period
With the enactment of the subversive laws the whole complex is confiscated, in this specific case the provision became operative only in 1888 with the suppression of the order, therefore the church and the adjoining convent transited the properties of the municipality. Campaign of restoration for the temple around 1886 and subsequent adaptation works for new uses for convent structures. In 1927 the church was reopened for worship. The convent has been extensively remodeled, today it houses the offices of the municipality. Severely damaged by the bombings of the Second World War of 1943, it was restored in 1947, a cycle of works that involved the almost total removal of the existing patrician tombs and the marble arches of some altars. In April 2013 the last restoration works of the temple were completed. 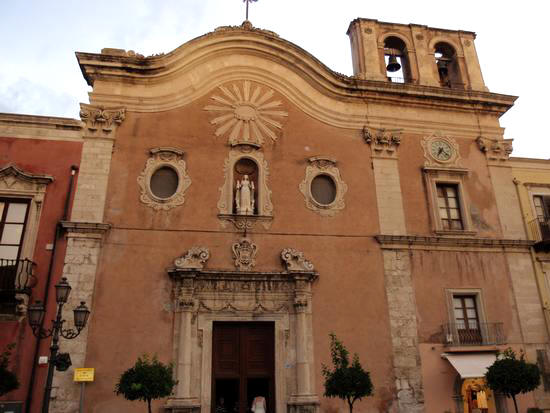 Sober and elegant, the façade, the fusion of Rococo and late Renaissance elements, gives rise to the style defined by the Messina Baroque style. The façade is framed by three pilasters in living stone blocks surmounted by Corinthian capitals. The left part on two orders includes the bell tower with the clock face on the second level. Above the cornice is a third order consisting of the bell cells. At the center of the façade a marble portal - probably that of the primitive temple dating back to 1620 - through a short flight of steps, allows access to the place of worship. Plinths bearing the noble coats of arms of the Baele barons, patrons of the church, hold columns surmounted by Corinthian capitals supporting the architrave decorated with garlands and phytomorphic motifs. Two curling swirls with an intermediate crowned crest constitute the tympanum. In the central niche adorned with scrolls is placed the marble sculpture depicting the Madonna della Consolazione, a work carried out in 1679 by the sculptor Milazzo Baldassare Valenti, on the sides two ovoid oculi. The perspective closes with a sunburst bearing the inscription REGIS CARMELI and an arched cornice with an elaborate molding with phytomorphic decorations and an apical iron cross.
On the left side there is the façade of the convent that includes a single noble floor, characterized by windows with wrought iron railings that alternate simple architraves with gables.

Indoor
The church has a single-nave system with altars leaning against the side walls in Baroque style. Six windows and as many sails intersect and characterize the barrel vault. Of the pre-existing inscriptions there is only one marble plaque and only one funeral monument.

Right aisle
Niche: the room hosts the bust representing the Ecce Homo. Near the counter-façade, a spiral staircase leads to the choir supported by pillars where a fine organ is installed. Medallion: Depiction of a Carmelite religious. Funeral sarcophagus: sepulchral monument, with a noble coat of arms, of the spouses Giovanni and Filomena Ciparo of 1583.
First bay: Altar of the Souls in Purgatory. On the elevation there is a painting depicting the Holy Family with Saint John, Saint Elizabeth, Saint Joseph in the background on the left, on the sides Sant'Anna and San Gioacchino, the Purgative Souls below, the Eternal Father among groups of angels in the upper register.
Medallion: Depiction of a Carmelite religious. Coat of arms and inscription: marble plaque, affixed between 1726 and 1727, collects the ashes of the Proto nobles and recalls, in the Latin inscription, the destruction of the seventeenth-century aristocratic tomb following the siege of Milazzo from 1718 - 1719.
Second bay: Altar of Saint Lucia. On the superelevation there is a painting of the Virgin with Child portrayed with Saint Lucia, Saint Nicholas of Bari and two Carmelite Saints.
Medallion: Depiction of a Carmelite religious. Niche with a statue of Saint Joachim.
Third span: Altare della Pietà. In the niche there is the Pietà sculptural group, among the paintings depicting Jesus at the column and Jesus praying. In the lunette God the Father Almighty.
Medallion. Depiction of a Carmelite religious.

Presbytery
The area is raised above the floor of the entire classroom. Three steps through the triumphal arch lead to the choir and the apse. The triumphal arch disposed on a double order separated from the cornice that characterizes the entire environment, presents a decorative stucco apparatus consisting of the four statues of Saints Carmelitani and culminating in the central frieze supported by cherubs bearing the coat of arms and Carmelite motto. The apse arch has a central coat of arms with an inscription and a delicate stucco decoration.

The eighteenth-century high altar versus Deum is made of polychrome marble, decorated with a central housing reproducing a circular temple with columns and delimited by a pair of allegorical statues. In the antependium a round reproduces the biblical episode the Dream of Isaac.

The eighteenth-century painting of the Madonna del Carmine depicted with the souls of Purgatory, a work attributed to Antonino Vescosi da Pozzo di Gotto on the left, is kept in the vault. The oil on canvas by an unknown artist (18th century) on the right depicts San Giovanni de Mata.
Works
17th century, Madonna with Child and St. Anthony, large canvas by unknown artist.

High altar.
Adjacent to the church stands the ancient Carmelite religious convent founded in 1570, almost quadrangular in shape, with a beautiful cloister in the middle, extended to the east. Originally formed by 32 smooth sandstone columns that supported the round arches with access through the beautiful eighteenth-century portal located at the center of the facade in Piazza Caio Duilio, formerly Piano del Carmine. The institution was an important study center, with a precious library, home to numerous chapters of the Order of the monastic province, meeting place for monarchs and other civil, military and religious figures.

The structure hosted Vittorio Emanuele II of Savoia and the court in April and June of 1714, recorded several times among the distinguished visitors Ferdinando I of the Two Sicilies. He was militarily occupied several times in the spring of 1821

After the transfer of the Carmelites, following the 1866 law that provided for the suppression of the Corporations and the monastic Orders, the entire occupied area was used as the seat of the town hall, housed the Post Office Building, the offices of the pro-loco, seat of a high school, for settlements which were demolished the north and east wings of the structure while the surviving arches were caged and walled to recover environments, interventions carried out at the turn of the years 1880 and 1889.

The premises of the old convent are still used as public offices and commercial establishments. The beautiful ground-floor door in monumental baroque, allows access to what was once the cloister, on whose paved surface the extended emblem and motto of the city of Milazzo was realized.

In the rooms of the convent still part of the sacred enclosure is a Crucified Christ on the Golgotha ​​depicted with Our Lady of Sorrows, oil on canvas, by Vincenzo Riolo.