Milazzo, a Castle of history in Sicily

The Castle of Milazzo, National Monument, with an area of ​​over 7 hectares of which 12.070 covered by buildings stands on the landscape of the Cape Town at the top of the ancient "Borgo". The first and rudimentary fortifications can be dated to the second age of the stone: Neolithic (about 4000 BC). Later with the first Greek colonizers (VIII-VIII sec. C.) this modest agglomeration took shape and increased in role and importance, having formed the Acropolis or "fortified city". But we must arrive at the Roman-Byzantine period to have the next "castrum" .; The video shot at the Castle of Milazzo on the occasion of the writing of a video work realized on Federico De Roberto, Milazzese and writer of "The illusion", as well as the "Vicerè", who gave the idea for a great film.
Here you can see the Castle as it appeared to the small protagonist of the novel. Video on the ghost of the Castle, not recommended for minors and heart patients!

The ghost of the castle 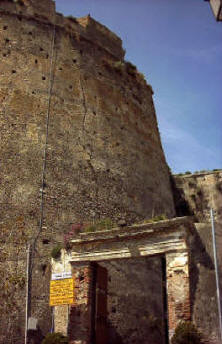 Even the Castle of Milazzo, like any important Castle, has its ghost. It is the ghost of a poor cloistered nun, in reality a girl in love with an English soldier, who was forced by her father to become a nun and then was even walled alive inside the walls of the same manor to prevent her dating with her lover . But the girl dies and her ghost appears in the full moon evenings inside the castle enclosure, but nobody fears the poor girl. The video with ghost is at link   http://vimeo.com/79200761

In 843 the Arabs gave life to the first nucleus that still today represents the oldest part of the Castle, a nucleus built on the Greek, Roman and Byzantine ruins. So the Normans and Swabians built new structures, while the Aragonese adapted the defensive system, and finally the Spaniards surrounded him with a mighty ramparts giving it the form of a "citadel". Since then the castle has taken the definitive form that we can still see today. 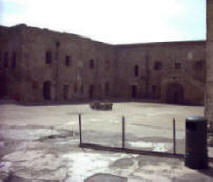 The visit to the Castle 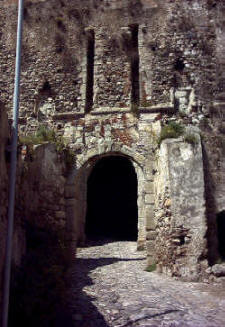 It starts, for obvious reasons from the lower part, which is the first reachable from the Renaissance walls, the last work, to gradually reach the oldest part that represents its heart. Therefore the first work that appears is the impressive Spanish Cinta whose main entrance opens under the Baluardo di S. Maria, of which some surviving structures of the ancient church of the same name of 1527 are visible (including the triumphal arch) in 1568 for the construction of the bastion. The entrance was called "of the three doors" because many closed such access to the fortress just crossed the drawbridge. The first arch of the door is from the last years of the 700; The next door that opens in the high ara walls is barred by a drawbridge thrown over a dry ditch. At the top there are the machicolations or plumbing that allowed the defenders to cast various materials. The Citadel or the Walled City was the residence of the magistrates. Defense from the South West to the North West from the mighty Spanish walls with imposing bulwarks of S. Maria and dele Isole. The construction of this wall was begun in 1529, under the emperor Charles V of Spain, by the viceroy of Sicily, Duke Ettore Pignatelli, and completed around 1575. Further altered by Suarez de Figuerosa, duke of Feria. It consists of two strong parallel and separated walls joined by a large barrel vault.

Inside it were obtained cisterns, warehouses, stalls, rooms used as prisons and accesses of numerous passages or underground walkways. It presents merlons, plumbing, casemates for the bass and the crossfire of the cannons. This work is the most important and striking example of fortification in Sicily. Of the numerous buildings that are located within the walls of the citadel, today it is possible to admire the ancient Duomo and the remains of the Palazzo dei Giurati, both being restored. Among them soon you can enjoy the restoration of the Old Cathedral, now planned for the spring-summer of 2003, apart from the real Castle with the Mastio. Who writes, who has had the good fortune to enter the structure of the restoration, assures you that the visitor is stunned in front of so much beauty and grandeur. The construction of the Cathedral was undertaken in 1608 on drawings by Camillo Camillani, a Florentine from the Scuola del Michelangelo, replacing the Church of Santa Maria, owned by the City, demolished in 1568 to allow the construction of the walls of the Spanish Cinta. 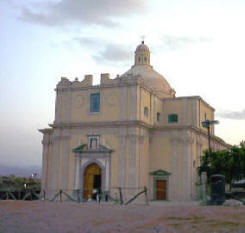 However, the works continued until the early 1700s. Two events were reported: the consecration to Santo Stefano Protomartire on 13. May 1680 and the celebration of TE DEUM in honor of Vittorio Amedeo II of Savoy, King of Sicily visiting the city in 1714. The Church, with a Greek Cross structure and unique large Central Dome, presents columns with Corinthian capitals and zoomorphic friezes, sculpted by Syracusan masters such as Domenico la Maestra. Curious is the detail of the dome of a total height of just 13 m, which is perhaps unique in its kind, deprived of the drum to not hinder the shooting of artillery. Worth noting is the aedicule above the portal of the Duomo with angels reminiscent of Florentine Mannerist art. 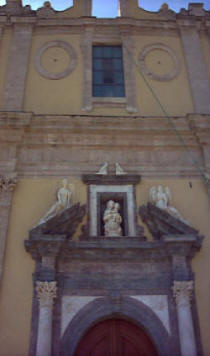 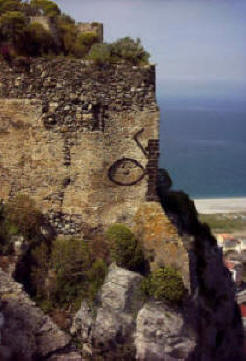 The eye of Milazzo.

On a spur of the nearby medieval walls that look towards the promontory, and down below towards the beach of the tone, where he wants the legend, Ulysses managed to take back the sea while Polyphemus threw a rock into the water (!) drawing, created with blocks of black lava stone, which traces the stylized form of a "magic insect" on whose origins and functions were not missing disparate attributions. It would seem to be the figure of the scarab with its very ancient symbolism linked to the geo-astronomical meaning of the exact index of the summer solstice, an expression of the esoteric mystical traditions of the Normans and the Swabians.

Continuing the ascent towards the Mastio, for those who do not suffer from the heart, you can admire on the right, about 100 meters after the Duomo, the Palazzo dei Giurati, seat of the Senate of the City of Milazzo. Built in the first twenty years of the '300 is marked by a wraparound median curb (cornice string course) and white stone pilasters. Widened on the north-east side by a small fifteenth-century body, between 1616 and 1637 it was connected to the Benedictine Monastery (see the story of the castle's ghost); the monastery opened onto the precipice overlooking Capo Milazzo with a large rectangular space and the cloister built on two levels. Following this complex construction, the ancient Palazzo dei Giurati was transformed into the hall of the new church of the Savior with a quadrangular apse to the west. However, the monastery was moved to the village in 1755 and the whole building was renovated and all the rooms became a municipal seat. After 1801, when the civic magistrates moved to the lower city, this building was abandoned to decay and devastation. Speaking of a monastery, do you know that a fallen nun was buried alive in the walls of the Bastion of the Islands? (see Castello, the dark mysteries). In the full moon evenings, we hear strange moans coming from that damned wall. The nun was in love with an English soldier, and it seems that he was hanging in a cage and left to die of hunger!

And, last but not least, the Mastio, the center and vital nucleus of the Cittadella, which stands at the top of a cliff (mt 98 s.l.m). To an Arab-Norman fortress built on older foundations that followed the works wanted by Federico di Svevia (1237-40) and executed by the architect Riccardo da Lentini. With "Alfonso d'Aragona" is the "Magnanimo", which in 1456 the Norman walls were restored and transformed into a more modern structure with irregular batters interspersed and defended by 5 strong semi-cylindrical shoe towers with tall gunboats. Between the two juxtaposed towers, located at the northern end, there is the only access door marked by a gothic portal with archivolt on which, inside a rhomboidal frame, is the emblem of the royals of Spain depicting the eagle of S. Giovanni holding the shield of unified Spain with the heraldic emblems of the ancient kingdoms of Castile, Aragon, Leon, Navarra and Granada. The access to the Keep is allowed by a single pointed arched door with a lava stone surmounted also by the Spanish coat of arms already observed. Entered the large courtyard where there is a large cistern that allows water supply during sieges; here the Castle appears as a closed trapezoidal structure and defended at the top by 4 quadrangular towers. The largest post on the west side is called the "Arab Tower" or Saracen, of Muslim construction dating back to the tenth century. Worth mentioning among the palaces of the Mastio, the famous Sala del General Parlamento of Sicily, so called for hosting in November-December 1295 the first Sicilian Parliament presided by Federico d'Aragona.

We are waiting for you at Castello di Milazzo!